Today, the President is in Camden to talk about the promising progress that city is making in enhancing community policing. Last December, President Obama launched the Task Force on 21st Century Policing to better understand specific policing challenges and help communities identify actions they can take to improve law enforcement and enhance community engagement. Since that time, we have seen law enforcement agencies around the country working harder than ever to make the promise of community policing real.

Many of the Task Force’s recommendations emphasize the opportunity for departments to better use data and technology to build community trust. As a response, the White House has launched the Police Data Initiative, which has mobilized 21 leading jurisdictions across the country to take fast action on concrete deliverables responding to these Task Force recommendations in the area of data and technology. Camden is one such jurisdiction.

By finding innovative work already underway in these diverse communities and bringing their leaders together with top technologists, researchers, data scientists and design experts, the Police Data Initiative is helping accelerate progress around data transparency and analysis, toward the goal of increased trust and impact. Through the Initiative, key stakeholders are establishing a community of practice that will allow for knowledge sharing, community-sourced problem solving, and the establishment of documented best practices that can serve as examples for police departments nationwide.

Like many police departments, Camden wants to use smarter, more data-driven ways of improving community policing efforts and reducing uses of force. However, challenges with technology systems often get in the way. For instance, the Camden County PD cobbles together 41 systems that have individual value but are not designed to work together, requiring their beat officers to enter the same data multiple times. In this environment, meaningful data analysis ends up being extremely difficult to conduct, requiring analysts to spend more time on extracting the data than on critical analysis.

The President’s Police Data Initiative has assembled a volunteer team of technology experts who are also in Camden today. The team will spend two days in Camden on a design sprint, engaging directly with front line officers, detectives, crime analysts and department leadership to help envision what a truly effective technology system could look like. The two-day deployment will help the team consider best practices and address specific technology questions as they arise, enabling departments like Camden to find the solutions that most fit their needs.

By upgrading its technology practices, the Camden County PD will have more efficient data supply chains, and will be better positioned to use that data to improve its internal operations and to identify and solve policing problems in a more timely manner. The lessons learned in Camden can help law enforcement around the country both by example and also directly since some of the development work can be shared though open source best practice.

Camden is just one of 21 communities currently participating in our Police Data Initiative. Through this effort, local police departments and other participants are responding first to Task Force recommendations within two streams of work:

The effort has focused on specific actions law enforcement agencies can take to make progress in these two areas. The collaboration has generated multiple commitments to action and the White House is working with agencies and key enabling partners now to drive quick implementation. 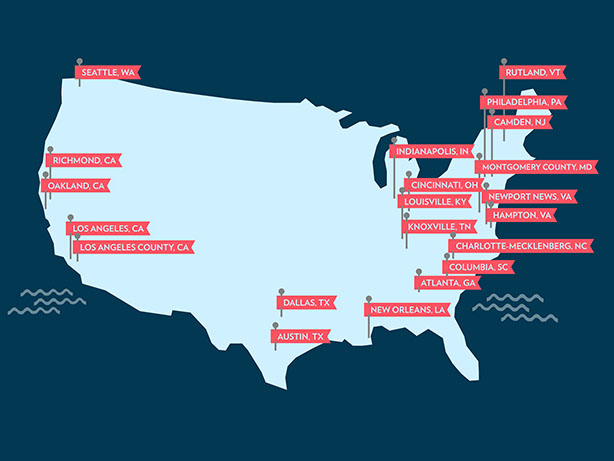 1. Use open data to build transparency and increase community trust.

We are excited about the Police Data Initiative as a fast, tangible, collaborative response to recommendations of the Task Force on 21st Century Policing and we are glad that so many cities have stepped forward to work towards better use of data and technology in ways that will build community trust and impact.

Megan Smith is the United States Chief Technology Officer (CTO) in the Office of Science and Technology Policy. Roy L. Austin, Jr. is Deputy Assistant to the President for Urban Affairs, Justice and Opportunity in the Domestic Policy Council.