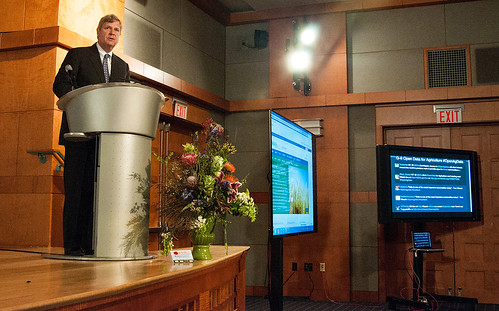 Posted by Dr. Catherine Woteki, USDA’s Chief Scientist and Under Secretary for Research, Education and Economics, on April 29, 2013 at 2:45 PM.

The opening day of the G-8 International Conference on Open Data for Agriculture was action-packed and inspiring. From the moment the doors opened at 7:30 am, the air was punctuated with the sound of languages from across the globe. Scientists, policy makers, and leaders from the non-profit and development community all shared a day of discovery and connection around the unlimited opportunity in open data for agriculture.

Secretary Vilsack kicked off the proceedings with a speech that focused the day. “Data is quickly becoming one of the most important commodities in agriculture,” he told the attendees, and encouraged the sharing of data to magnify its power.  He also compared the digital revolution fueled by open data to the industrial revolution, in that data sharing has the same potential to accelerate development of new tools that will bolster the productivity of farmers around the world.

As head of the U.S. delegation, he announced the launch of the federal government’s contribution to these efforts: the Food, Agriculture and Rural data community, which offers a catalog of over 300 data sets as well as numerous apps, tools and statistical products. The community can be found onwww.data.gov.

The community will provide a one-stop shop where the public can come to access all the available data relevant to agriculture and have come from federal research and investments. The community was launched in hopes that farmers, researchers, data analysts, businesses and governments will use it to locate, download and utilize food, agriculture and rural data to address serious social, economic and environmental concerns.

The Secretary was followed by Bill Gates, who addressed the conference via a short video presentation. Gates emphasized the importance of open data to entrepreneurship and innovation.  Other speakers included U.S. Chief Technology Officer Todd Park and Vice President of the World Bank Dr. Rachel Kyte.

Then the day took off with “lightning presentations” of apps already created using open data, and already working for farmers, scientists and policymakers.

Other announcements made by day’s end from our G-8 partners and others include a commitment from the African Orphan Crop consortium to share genetic sequences of neglected crops important to food security in Africa, and new data releases from the International Food Policy Research Institute, and the International Center for Tropical Agriculture with the Consultative Group on International Agriculture Research.

I hope you’ll join us tomorrow at the conference, which will be live-streamed at here and follow us on Twitter, #OpenAgData.

To read Secretary Vilsack’s speech click here.  To learn more about Open Data click here. Photos for the event can be found here.